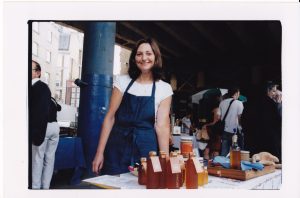 I began selling Argan oil in Borough market in 2001. It hadn’t been open more than 2-3 years and there weren’t too many of us trading there. There were around 40 stalls, the atmosphere was so friendly and it was fun to meet interesting customers, chefs and cooker writers.

I had a bowl of Agan oil for tasters with great bread bought from Flour Power. No-one had heard of it and many people found the taste odd, unusual and unfamiliar. I suppose it was like that many years ago in the UK when we weren’t familiar with olive oil. That was a long time ago and Wild Wood Groves Argan oil was later stocked in Partridges, Fortnum & Mason and Harrods all as a result of Borough.

Visit the Shop
This site uses cookies: Find out more.